Back to previous page

The city of Verona was founded by the Romans in the second century BC, and was located at the crossroads of three major roads, Via Postumia, Via Gallica and Via Claudio Augusta. There are many monuments and remains of this important civilisation left in our city, and the excellent state of preservation of the historical heritage means it is accessible to tourists, as well as allowing the City to use these facilities for important events such as the Opera Festival, Verona Jazz, Shakespeare Festival and many others.
There are several tours, such as those organised by the City (for more information see www.turismoverona.eu), dedicated to the so-called “Roman Verona”; usually they pass and/or visit the Arco dei Gavi, Porta Borsari, the Scaligeri archaeological excavation site, Ponte Pietra, the Roman Theatre, Porta Leoni and the Arena Amphitheatre.

With the the end of the Roman Empire (476 AD) Verona became a city of great importance for the rulers of the Roman-barbarian kingdoms that followed, although it was not immune to the devastation caused by wars, famines and disasters of this dark period. Only with the renaissance around the year one thousand did our city experience new development which, in the space of two centuries, would transform it into first a wealthy and influential free city and then a powerful and prestigious signoria, under the rule of the Scaliger.

With the Congress of Vienna in 1815 Verona became an Austrian possession and, in 1833, the city’s appearance was redesigned: building a formidable defense system with fortified walls, doors and strongholds made Verona the Habsburg logistical-military centre of Lombardy–Venetia. 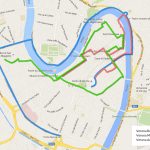